As you already know, part of my duties down here involve delivering helium to BICEP2, one of the telescopes in the dark sector. The main rules for entry into the dark sector are no white lights (only red), and no keying your radio, unless it is an emergency. Both those rules are to reduce interference with the science that goes on out there. There are four telescopes in the dark sector, MAPO, ICE CUBE, BICEP2 and SPT (South Pole Telescope). Both BICEP2 and SPT are located furthest from the station, in the Dark Sector Lab (DSL), so that is what I know most about.
SPT is a 10m telescope (the largest every deployed at the South Pole), designed to do large-scale millimeter and sub-millimeter wave surveys of faint, low contrast emissions, making it idea to observe primary and secondary anisotopies in the Cosmic Microwave Background (CMB). As an aside, anisotropy is the property being directionally dependent, as apposed to isotropy, which suggests identical properties in all directions. One example of anisotropy is light coming through a polarizer. In one orientation, a certain component of light will be transmitted, while another component will be absorbed and/or reflected. An example of an anisotropic material is wood, which is easier to split along the grain than against it.
In the case of the CMB, anisotropy is used to describe its uneven temperature distribution. By carefully mapping the CMB, the scientists working with SPT are able to find clusters of galaxies and determine their sizes. The hope is to use this to confirm the existence of Dark Energy, one of the main components of the universe (matter makes up only about 4% of the universe). DE pushes things that are far apart, even further apart, the opposite of gravity, which pulls things togeather. If it exists, it will have an effect on how galaxy clusters, the biggest things in the universe, grow over time. By tracking how many large-massed clusters have developed during different periods in the history of the universe, they can probe the opposing forces of gravity and DE.


BICEP2 is also a millimeter/sub-millimeter telescope studying the CMB. It this case, however, BICEP2 is looking at the CMB in order to explore the conditions in the universe in the earliest times after the Big Bag. The CMB is the result of photons produced when the universe cooled enough to allow electrons to combine to form hydrogen (~380,000 years after the Big Bang), making the CMB the oldest light in the universe, and thus, a very powerful tool for probing the universe at these early times. One of the theories of what happened immediately after the Big Bang, is that the universe underwent a period of rapid expansion called Inflation. If this did in fact occur, it would produce something called the Cosmic Gravitational-Wave Background, which in turn would have left a faint signature in the polarization of the CMB. It is this signature that BICEP2 (512 detectors), and its predecessor BICEP1(98 detectors), are searching for.

My role in all this is delivering the helium that keeps the optics and detectors on BICEP2 cool. The optics are kept at a temperature of 4K, four degrees above absolute zero. The detectors are kept evern cooler, at 250mK. This reduces the amount of electron noise in the detectors, allowing them to more sensitively and accurately detect that signature they are looking for.
In the case of both BICEP2 and SPT, they were built at the South Pole for a very specific reason. It is extremely dry here. Water vapor in the atmosphere absorbs millimeter and sub-millimeter wave lengths, making it difficult to observe the CMB in most places. The combination of altitude (almost 11,000 ft) and cold temperatures make for a very dry atmosphere. As an added bonus, night lasts for months here. The lack of daily sunrises/sunsets make for an extremely stable atmosphere, and allow for extended observations that would otherwise be interrupted by the sun. 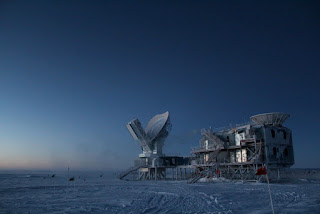 If you'd like to learn more about BICEP2 and SPT, these are some good places to start:
BICEP2
South Pole Telescope

Photo of the Day